So, now that we’ve had a few days to deal with the weirdness that was the 1987 adaptation of Northanger Abbey, let us continue with the only other version available, the 2007 ITV version adapted by Andrew Davies. Unlike the 1987 one, this one starts off with Catherine Morland’s baptism, shows us her youth to age sixteen (and funnily enough, the clothing silhouette seen never changes, which makes is hard to distinguish the passage of time). The hair for Catherine was very romanticized in terms of style and leaned more towards the Edwardian than Regency (so, they tended to make her look more “romantic” than regency which suited the actress’ face, but was an unusual choice given this had a big budget and they could do a better job at a historically accurate hairstyle). 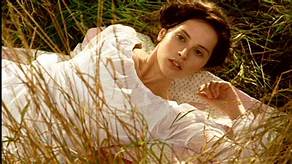 Felicity Jones as Catherine Morland and her Edwardian Hair.

Like the the previous version, they used Catherine’s imagination and had fun with scenes of wild scenes lifted from the novels she tended to read. Instead of Gothic scenes or Erotica, we got more swashbuckling adventure, which I thought was more appropriate and much more fun. The character, after all, is going to Bath on an adventure of her own so the parallel is meant to be obvious. The casting was done very well for this adaptation and everyone involved seemed to understand their parts, which is always a good thing. Sylvestra Le Touzel was lovely as Mrs. Allen and is no stranger to Austen adaptations as she was Fanny Price in a 1983 version of Mansfield Park (it’s always lovely to see actors from one adaptation show up in another). Davies, of course, does still keep some sexual innuendos in (he is famous for adapting the 1995 Pride and Prejudice version with Colin Firth we all love), so it should come to no shock that the character of John Thorpe makes a comment that Catherine is a “peach ripe for the plucking” when he first sees her. I don’t mind the statement because it shows the baseness of the character (yes, sex can be used in Austen is done correctly and with finesse).

What this version has that the previous one didn’t is JJ Fields. He sparkles with immense wit and a great amount of humor as Henry Tilney. I’ve always thought the character of Henry Tilney as being Austen’s best male flirt she ever wrote and finally, to see it portrayed this way was very gratifying. He’s charming, but obnoxiously funny at the same time that you cannot take his flirtation at all seriously. For me, he is the perfect Henry Tilney and while I would love to see more versions of this novel in my lifetime, I feel bad for anyone that has to compete with this portrayal.

I did not mind Carey Mulligan as Isabella Thorpe. I think she did a decent job as the conniving Isabella, but she didn’t quite have the evil, sinister quality that the 1987 version had. The Thorpe siblings in the novel, as they were portrayed in the weird 1987 version, are sinister, manipulative, and are just plain evil. They are greedy and feel the only way to have money is to marry into it. It would have been nice to see some of this in her performance as well as in the brother’s. Though this version does give us a glimpse into how far she was willing to go with Captain Tilney in order to try and marry into wealth (apparently willing to lose her innocence and bed the man), only to find out he was only using her as she was trying to use him.

Like the 1987 version, I am confused as to what year this takes place. At one point, Isabella mentions Lord Byron and insinuates how awful he is (hints of his incestuous relationship with his sister Augusta are rumored to have occurred around 1814). So, this may be taken place in 1817, when it was published or thereabouts. So, the dresses do fit the fashions of the time frame if that is the case. The hair, sometimes yes and sometimes no. For the most part, yes the hair for most of the ladies is still very Regency and fits. Catherine, as I have stated before, tends to be more Edwardian inspired, though sometimes it leans back towards the Regency.

Northanger Abbey. Again, we go with a Castle and a Moat. General Tilney (Liam Cunningham)

One main issue I have with both versions is the depiction of Northanger Abbey. In the novel, it’s described as a house, not even Gothic in nature (meaning, it’s not a castle, it has no Gothic architecture), but a respectable, Georgian Manor House. Not a castle, no moat, just a house. For once, it would be pleasant to have an adaptation actually be accurate in this description. And, in the novel, we visit Henry’s parsonage. We never visit his home in either adaptation. It’s sad because this is his home, the place he lives and where he’s brought Catherine, his sister and his father to visit one day. Another is the need to have a scene of young ladies in their undergarments. Since the undergarments are never 100% accurate, please desist in showing us this. Actually, if you show is this, then I demand you show us what the men are wearing as well (basically, have a similar scene showing the men with their undergarments-hint, they didn’t wear much if any). In other words, stop sexualizing Austen the wrong way. Also, clichéd rainy day almost kiss scenes need to stop in period films or adaptations. Just….no.

Now, things that were good, they showed a young boy still in a dress (and yes, he would have been in a dress until he was breeched). Excellent use of lighting and candles (no fire hazards that I could see). And I did appreciate the overall color schemes that were used-light and pale for the most part with a few bright colors now and again. Keep in mind that vivid colors weren’t like our vivid colors today. Colors were rich, but not necessarily bright. And the use of prints (both large and small) helped create texture. I did wish for more background variety, like servants and did notice (again) the lack of naval men in Bath. It wouldn’t be that hard to have extra dressed in naval uniforms to give a more authentic feel to Bath.

So, it may surprise you but I actually do recommend the 1987 version but with this warning: don’t expect it to be accurate or faithful to the novel. As a first attempt, it’s weird, but in it’s own way, a bit enjoyable. It’s more of a Gothic film with bit’s of Austen thrown in than anything else. I feel it’s more of a fun Halloween film to enjoy after watching Vincent Price in Fall of the House of Usher and before Del Toro’s Crimson Peak. It sort of fills that middle ground between both of those films.

For me, hands down I highly recommend the 2007 version if you are looking for an adaptation that’s accurate to the novel (for the most part), enjoyable, and just fun to watch. I would definitely state it should be added to anyone’s DVD library. Plus, he understands MUSLIN! Do you not comprehend the significance of this?!

Correction: I had wrongly stated in the novel by Austen, the home is not described as being Gothic. Somewhere, in the back of my mind, that notion bothered me because why would two adaptations set it in a castle if Jane Austen herself did not indicate something of the sort? So, instead of correcting the original mistake, I opted to write in a correction to show that anyone, even those of us who read and are entrenched in her works make errors. Yes, in the novel Austen makes mention of the Abbey as being Gothic in the courtyard (or having Gothic elements). This could mean anything from some use of re-purposed stonework from an actual Abbey or Monastery, or ruins of an Abbey that are close enough to this home. In the book Jane Austen’s Country Life, author Deidre Le Faye points out that the boarding school Jane and Cassandra attended for two years (Mrs. Latournelle’s in Reading) was also called the Abbey School because the building was adjacent to an abbey gateway of an old Medieval abbey. This gateway would have Gothic elements and perhaps was inspiration for the similar elements being described by Austen herself in Northanger Abbey. 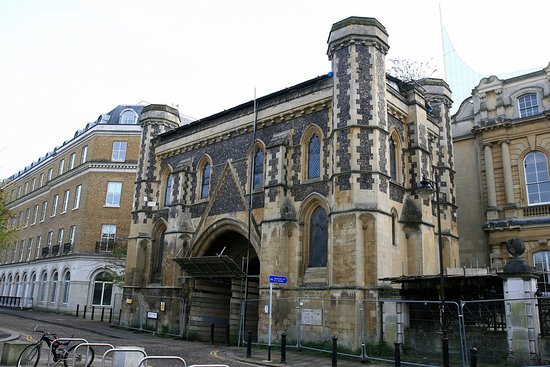 Abbey Gate at Reading. I believe the building to the right has replaced the older, 18th Century building that was the Abbey School.

I have often thought of the house in Northanger Abbey as looking more like a Tudor Manor House. Not quite Gothic in terms of architecture, but these homes still did have the old arched windows, were made of stone, and did look very grand as some did look like miniature castles or forts. Just as as large as the ones used in either adaptation.

I sort of think this is more like how Northanger Abbey should look. Sadly, this place has been abandoned. But do notice the arch entrance way and the windows do seem to have some curvature to them. I did try and find the name of it and could not. Si triste! 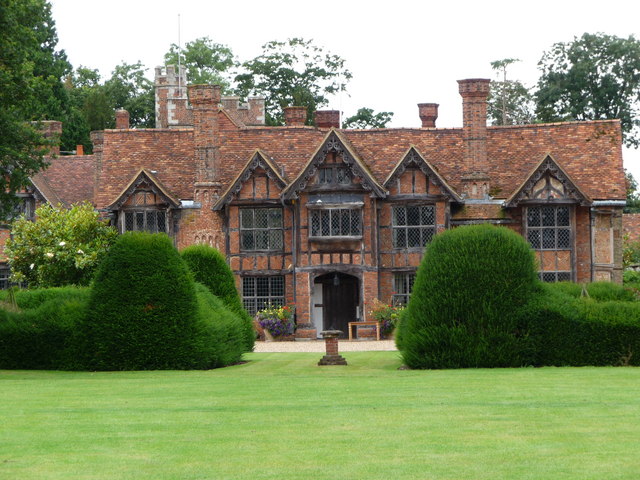 This is Dorney Court, located near Windsor Castle. I have often thought it would be a splendid Northanger Abbey as well.  (dorneycourt.co.uk is the official website and the pictures of this place are spectacular). Edmondsham House (located in Wimborne, Dorset) is a Tudor Manor House that was updated with elements during the Georgian Era. I saw this place online over ten years ago and immediately thought it was perfect for Northanger Abbey. There’s a 12the Century Church located nearby as well, so definitely has some Gothic vibes!

I do hope everyone has at least enjoyed the few homes that I do believe still fit in the whole grand feeling of what Northanger Abbey should feel without it being an actual castle. Please do remember, this is just my personal opinion. Some may like the use of castles because it mimics the Gothic novels of Romance of the Forest (Radcliffe) and Castle of Otranto (Walpole).