Now I venture into the one novel of Jane Austen’s that, quite frankly, I’ve never really enjoyed. Emma was the last novel to be published in Austen’s lifetime (23 December 1815, but the first edition lists the novel as being published in 1816). Austen herself stated that this was a character which “no one but myself will much like.” I have read Emma several times and I do enjoy the witty way in which Austen writes the characters, the scenes of folly, the playful ways in which the characters do endear themselves to the reader, I just have never been as fond of this book as I have of her other works. Out of the six novels Jane Austen wrote, Emma ranks at the bottom for me in terms of personal preference. Perhaps it’s because I do not find myself as having much in common with a rich, spoiled pretty heroine who has everything whereas I’ve struggled all my life. This is the only time Austen wrote a character who basically has it all; all other main characters tend to be poor and, therefore, are more palatable. However, Emma is a fine novel and should be enjoyed for the fine writing. Even though it is not a personal favorite of mine doesn’t mean I don’t wish to see a decent adaptation of it.

The 1972 version is the first adaptation done by the BBC for a six-part miniseries. It was adapted by Denis Constanduros and he was extremely faithful to the novel. A few lines were added that were not in the novel, but they seemed to be in the spirit of the mini-series and fit the overall feel. Like the 1971 Persuasion, the indoor scenes are most likely are done on sound stages, so rooms will be not so accurate in terms of dimensions and sizes (but I did notice the rooms were more proportionate than they were in Persuasion). And like Persuasion, there is a difference in film quality between outdoor and indoor filming, but that cannot be helped. It does seem that a lot was gained from the filming of Persuasion in 1971 so when it came to filming this adaptation, much that may have been an issue previously (such as background colors and costumes, etc), were fixed.

An example of the lovely muted colors. The silhouette is most likely post 1815.

The background colors of the set pieces are much more muted, so the costumes of the actors and actresses stand out more, which works out better. Color television, we must  recall, is still a fairly new medium and what they think may work doesn’t always translate to the television set. The hairstyles of the men is still skewing slightly towards the Victorian, however it seems they are costuming this towards the later part of the 1810s (most likely after 1815), so some transitional hairstyles I don’t mind seeing. 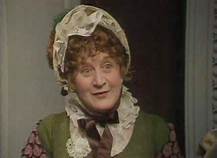 Some of the stand out cast I must mention is Mollie Sugden (most famous from “Are You Being Served?”) portrays Mrs. Goddard. Instead of being a barely there character, she’s given a bit more presence, even being in scenes accompanying Harriet (which, when one thinks about it, she would be) as an appropriate adult. Plus it is nice to see her in a role looking fairly normal. Debbie Bowen portrays Harriet Smith and is very elfin looking. She is very dainty compared to the actress portraying Emma and very fair compared to Emma (it’s usually the other way in more recent adaptations). It gives the character an air of innocence.

The costumes, for the most part, are fairly lovely and accurate for the most part. Emma’s dresses seem to date from after 1815. Some variation in the others seem to range from 1810-1815, which would be accurate for the time period as women would wear a gown until it wore out (it was cheaper and less expensive to alter a gown then have a new one made). One would expect Miss Bates, for example, to have a gown at least 5-10 years out of date, but perhaps altered to fit the newer silhouette (at this time, it meant the removal of excess fabric from the back). I didn’t quite understand the wearing of the mop caps (see image above), but since they wore them under the bonnets, I saw them as a way of protecting the hair from the inside of the hats. Women did wear mob caps indoors, though usually spinsters and the elderly ladies (besides married ones). But I can see younger ladies wearing them if they were protecting their hair from having been recently washed. It’s a minor point and not worth getting too up in arms about. 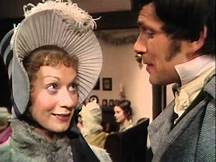 The pleating of this hat is divine.

I must commend the attention to detail for the pleating done on the inside of some of the hats used. The hat worn by Emma (see above) is simply divine! It frames her face perfectly and is in a nice, neutral shade to not overcome the natural coloring of the actresses’ face. Plus the draping of the feather is done so well! And while you cannot tell, she does wear hat pins! Hat pins are important as they keep the hat in place and women used them.

Other good historical accuracies used is they show servants wearing tings like caps, aprons, half boots, sensible sturdy clothes. Mr. Woodhouse is portrayed as being frail and with an unnatural love of gruel (which he does in the novel). Jane Fairfax is shown to be delicate and ethereal, which I like, but she is too delicate. There is a strength to that character for enduring all she does for as long as she does. Gifting someone a piano is very wrong and amounts to a declaration of a proposal of marriage. I’ve always hated that part of the novel (and Jane should have never accepted such a gift). Mrs. Weston’s pregnancy is mentioned (her condition) and is even shown at one point, but isn’t shown to be pregnant, which is weird. I do love how they show curls were achieved by tying them up with rags at night (when they show Harriet in bed ill). Dancing shown is lively, which I approve. And Mrs. Elton is sometimes portrayed as not being cruel, but perhaps trying too hard to fit in (or wanting to be liked).

Some unusual choices made in this adaptation were the Dixons were removed as the Campbell’s in-laws (the daughter was gone) and the Dixons were mentioned as potential employers of Jane instead. Considering this was a six-part miniseries, I didn’t understand the reason for changing such a small, but vital part like that. Having a potential employer seen as sending you a piano is even more scandalous than the husband of your friend. It makes the thought of Dixon as Jane’s supposed lover even worse. The Box Hill incident, Emma is then seen apologizing to Miss Bates, which doesn’t exist in the novel. Now, I do agree Emma should apologize, but disagree that Miss Bates would then state Emma would have nothing to apologize for. Even though the costumes are nicer and moe accurate, hidden zipper plackets are seen. I am not being overly not picky on this, it’s just an FYI for people thinking that these are going to be completely accurate based on what I’ve said and then may complain that I didn’t mention the plackets. Well, I’ve mentioned them. As for the makeup, it’s light on some and heavier on others, which probably would have existed at that time, but I do question some of the color choices. Some of the colors used are too modern for that time period (they didn’t have too many choices in terms of lip colors, so to see some bordering on burgundy are a bit inauthentic to say the least).

Overall, for a first adaptation, this one does a really good job. By first, I do mean for a first adaptation that was preserved on film. There are 5 previous adaptations that were done on television. They were all done live from 1948-1960 in America and in the UK and there are no recordings available. While I did watch 4 adaptations for this next round of blog posts, I did not watch 1995’s Clueless nor 2010’s Aisha as they are both loosely based on the original novel and my purpose tis to watch versions and rate them on historical accuracy. There is apparently another film version expected out in 2020. No word on whether it will be a loose adaptation or a historical attempt. 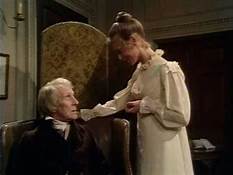 Bring another bowl of gruel!