There are actually two versions of Emma that were released in 1996-a film version and an ITV version. Part 2 will deal with the film version because it is probably more well known and most libraries should have a copy of it (or be able to get it in case anyone wishes to watch it).

Now, this was a big budget ($7 Million US) adaptation put into works due to the success of Sense & Sensibility, Persuasion, and Pride & Prejudice (all released in 1995). Douglas McGrath directed and adapted the novel, which is not an easy thing to do. I do feel, overall, he did a fairly decent job with the adaptation and directing. This is a short film (2 hrs) for quite a lengthy novel. Once ick factor we cannot get away from is this was produced by the Weinsteins (yes, those two disgusting examples of men). Yes, that may turn off some Austen fans, but the focus should be on the film itself, not the unfortunate connections it has.

I do like that it starts with the wedding of Miss Taylor to Mr. Weston. While most women in Miss Taylor’s position would have historically gotten married in their best (remember, she is a governess/companion), I don’t mind the look of a wedding dress. Historically, Princess Caroline had a wedding dress so there were dresses made specifically for women who could afford them, but a majority of women (especailly the women in Austen’s life and as depicted in the novels) would have worn their best gown or had a new Sunday best gown made. Again, this is just a little historical fact and doesn’t take away from the lovely scene. I did enjoy Mr. Woodhouse’s obsession with no one eating the Wedding Cake, because that is straight from the novel and is a bit of fun. 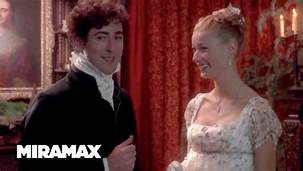 One issue that I found weird is some of the hairstyles used for Emma seemed too tight (see image above). Some were much looser, with lovely curls that played to the actress’s features. The overly tight look I felt seemed out of place. I think they should have stuck with the looser, softer look throughout. Alan Cumming’s hair is curly and playful, which is completely at odds with his character. Mr. Cumming sparkles in any role he is in and I don’t care if he IS the awful Mr. Elton, I still love him! Ewan McGreagor’s long locks are a bit Lord Fauntleroy (basically, a long page boy look) and doesn’t work at all. Toni Collette is excellent as Harriet Smith. Jeremy Northam is Mr. Knightly and has very Mr. Darcy-esque hair, but it suits him. The cast, overall, is quite good. I don’t mind Gwyenth Paltrow as Emma, but I do think Toni Collette would have been an excellent choice for Emma as well. I actually would have cast Ms. Paltrow as Jane Fairfax because I think playing someone who has to constantly struggle with keeping their emotions in check would have been a very good challenge for her. But Hollywood doesn’t cast people for roles that may challenge them. They cast based on who is a bigger box office draw and in 1996, Gwyneth Paltrow would have been the bigger draw over Toni Collette. What I find very interesting is Phyllida Law, Emma Thompson’s mother, portrays Mrs. Bates. I just find it interesting because Ms. Thompson was in Sense & Sensibility. Sophie Thompson plays Miss Bates (so yes, a real life mother and daughter portray a mother and daughter on screen).

An example of the too tight hairstyle. It’s intricate, but does nothing for the actress’s face. 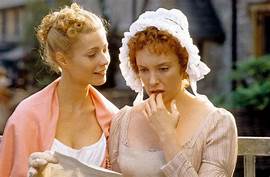 One thing I did notice, which I found extremely distracting (because I would find it so) is I can tell when someone is wearing period undergarments or not. Clothes do hang and sit differently when the body is wearing modern undergarments versus period ones which creates the silhouette. Basically, you see the background people in them, but not the main actresses. One easy way to tell is simply the shape of their bust. Period corsets would push the bust up to create a shelf-like silhouette (especially if one was particularly blessed in that area). Women with smaller busts would still have a pushed up shelf silhouette. If it looks like they are wearing a modern bra, they probably are. If they are wearing a Victorian corset (which is a completely different look), not only is it the wrong corset, you can tell it’s the wrong silhouette (and yes, I have spotted a few of them in this film for the extras).

This should help anyone who needs a refresher course on what a Regency Silhouette for ladies looks like. So when I state I can tell, this is what I am referring to.

Costumes were designed by Ruth Meyers and she stated she decided to draw on the 1920s, specifically the looks of the flappers, (because she said there are many similarities between the two silhouettes) and decided to go for more of a watercolor look with pastels than “sepia”. If you are wondering, she was heavily criticized for being so inaccurate. As she should be because the two silhouettes are nothing alike. Light colors were used during this time, but not Easter egg colors because those dyes did not exist. She could have used, instead, various light prints to give the light and airy feel she wanted and also staying within the historical confines. The wedding dress Emma wears at the end was inspired by 1940s lace the designer fell in love with (again, lace in the 1940s would have different patterns from what was being used in the 1800s). This really boils down to two major factors: the ability to research and time. Based on her interviews and thought processes, it’s clear Ms. Meyers was overwhelmed and did not understand historical costuming. Not every Costume Designer is taught this. As a designer, I cannot do any flat patterning nor draping because I was not taught. Now, I would love to learn and she could have, once she received the script, contacted people who understood this period better or just understood historical costuming better. Now, to be fair, she was given five weeks to create 150 costumes. Considering the budget as $7 million US, they should have given her at least 3 months (that’s 12 weeks) to do the costumes for the principals and going through all the stock rooms of the BBC and costume shops in the UK. An overview of the 1920s Flapper Silhouette: notice the dropped waistline.

Other inaccuracies in this film which are bothersome (script issues) is having Mr. Elton come up with the idea to have Harriet’s portrait done. In the novel, it’s Emma who suggests it. Also, she poses in a very Grecian costume when in the novel, she’s sitting down (basically, it’s just weird). The tent gazebo used for outdoor scenes is something I’ve never seen before in a period piece. I’m sure something similar did exist for the military, but would non-military people be using them? John and Isabella are barely seen and it’s actually sad. Miss Bates seems to be written to be completely stupid and she isn’t stupid. She’s a bit silly, but the script does the character no justice. Also, ladies would not go outside without bonnets. I don’t care if they are not wearing them, they should be carrying them at least. And the dresses are either form fitting at the bust or too loose I’m afraid of a wardrobe malfunction. Also, sandwiches at the strawberry hill picnic. I don’t think tea sandwiches existed at this time. Plus, modern shoes-just no.

The softer hairstyles suited the actress much better.

Points that I did like in this film (because I do try to find good things in all the adaptations). Harriet’s hair is always very soft and flattering, which I did like. Jane Fairfax (portrayed by Polly Walker) is dressed more simply and more elegantly than Emma and I do wonder if her outfits came from a stockroom because they appear more accurate and when the costumes from this film were put on display, many that were worn for the character of Jane Fairfax were not available for viewing (so it does make me think they were rented). The lighting used indoors was very well done. It can be tricky to make sure the lighting that is being used doesn’t detract from the candles used on set (you also don’t want too little lighting). I did find the “thoughts” of Emma amusing as well as her writing in her diary. It allowed us to hear a side of Emma no one else could. And I do like the contrast of brighter colors for Emma and Harriet with the duller colors of the Bates and the subdued colors of Jane Fairfax. Thought I did find it amusing how Mrs. Elton often dresses in similar colors to Emma (bright pastels). I don’t mind Emma doing archery (it seems like that would be something Knightly would have taught her).

Ewan McGregor as Frank Churchill (and bad hair) with Emma and the really tight hair.

Overall, this isn’t a bad film and I did enjoy it. Now, would I purchase this? No. It has too many issues with the costumes and hairstyles that I find it frustrating to watch. But this is our first big budget version of Emma. Our second version is set to come out in Theaters in 2020. This newer version is to be directed by Autumn de Wilde with Anya Taylor-Joy as Emma Woodhouse and Johnny Flynn as Mr. Knightly. There is no other information available. Emma is again to be blonde and Mr. Knightly is very blond as well. Mr. Flynn is also portraying David Bowie in Stardust, which is a film not endorsed nor sanctioned by the David Bowie Estate nor his family. As someone who has loved Bowie all her life (since the tender age of 6), it’s a film I will not be seeing.  There’s also a version of Persuasion set to come out this year with the expected run time of 20 minutes (no, I am not kidding). And other version of Persuasion called Modern Persuasion is due to come out in 2020 except it takes place in NYC and deals with business (which sounds more along the lines of a Clueless adaptation-meaning very loose). 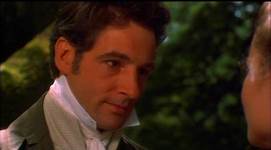