Andrew Davies is known for his 1995 adaptation of Pride & Prejudice. He’s gone on to adapt other Austen works for BBC or ITV. After the hit that was Pride & Prejudice, he approached the BBC with his script for Emma. They turned him down as they had contracted with Sandy Welch to provide an adaptation. Oddly enough, the BBC adaptation didn’t come out for 12 years (2008). And this version had to compete with the Hollywood film version (and did very well). Because Andrew Davies wanted to have his version come out, he went to ITV and took practically the entire crew that worked on Pride & Prejudice with him (so the crew was well familiar with the time period, which is helpful). 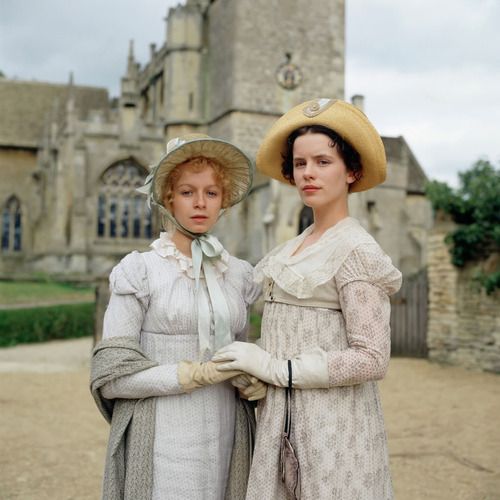 The adaptation starts off with chickens being stolen. This was, while not a common occurrence during this time period, a concern as most people raised their own chickens, ducks, turkeys so having any poultry stolen was a loss of eggs and meat. It’s also funny because it’s mentioned in the novel Emma (but towards the end) as a good reason for Mr. Knightly to move into the house with Emma & Mr. Woodhouse. So, it’s a nice little nod to the novel and this version ends with the chickens being stolen as well (so the chicken theft bookends the adaptation). It’s also the only adaptation to show the poor and working class people of Highbury. Poor farm workers would have been seen quite regularly. And Highbury being only 16 miles from London means you would get migration of the poor during the warmer months (like the gypsies). This is also the only adaptation to not show Emma as a blonde. No where in Austen’s novel does it specifically state Emma Woodhouse is a blonde. We base this on drawing and illustrations done during the Victorian Era and also because the 1972 version has Emma with dark blonde/light brown hair. Personally, I like the contrast of Emma with dark hair compared to Harriet and her lighter locks. 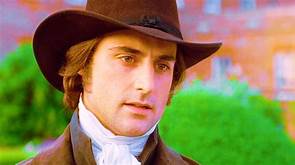 For the most part, the hair in this adaptation is really good. Harriet is shown with her hair down in Church, which I don’t think she would do, but the rest of the time her hair is up, so it’s not that big of problem (just an odd choice). They show older men wearing powdered wigs (or wigs in general) with the younger set having natural hair styled in a variety of ways. Mr. Knightly’s hair is very long and not quite fashionable, but considering he runs his farm and oversees others like Abbey Mill (which he rents out), not being in the height of fashion works in his favor (as opposed to the other adaptations were Knightly is impeccably dressed). Mr. Elton portrayed by Dominic Rowan and he is elegantly dressed, making him an excellent contrast to Mr. Knightly. 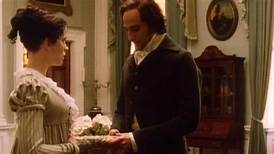 The costumes are very well done, but considering it’s the same crew as the 1995 Pride & Prejudice, one would expect the same kind of attention to detail, which we do get. While Emma and Harriet are both dressed in the latest fashions, Emma’s gowns are made of better fabrics and have much more detail, giving her the appearance of being socially above Harriet (which she is) yet still looking not so far above Harriet that you cannot see these two being friends.  And Kate Beckingsale portrays Emma as a young girl (which she is) who just doesn’t understand how the real world works. Emma’s fantasies of Harriet getting married to various men is proof of Emma’s more childlike nature (besides just being fun). They also show Emma puffing up Harriet (making Harriet believe herself too good for Robert Martin) which falls in line more with what I recall from the novel.

It’s interesting that they do show servants in this film and I do like it. They show servants riding on top of carriages, holding all of the picnic items for the outing to Box Hill. So while the people complain about the heat, the servants have long been exposed to it and have not had the comfort of being inside a carriage to get away from the sun. The gypsies are shown to be unrelenting in their pursuit of Harriet and money. I’ve often wonder how accurate that was, but reading Le Faye’s Jane Austen’s Country Life, she points out newspaper articles indicating gypsies (or any wandering poor person) were sometimes ruthless in robbing people. 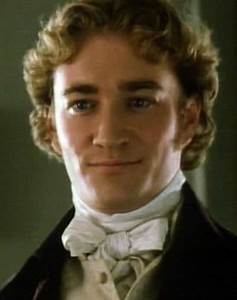 Harriet’s portrait, like the 1972 version, sticks to the novel and has her sitting down. Miss Taylor is seen getting married in her best gown, which is accurate to someone in her position. One thing I couldn’t quite understand was Mrs. Elton’s accent. She sounded a bit American at times. Did they do this to show she was uncouth? I’m at a loss because it’s just a weird choice. Or she just has an accent that I have never heard before (and I’ve watched a lot of UK television in my life). Prunella Scales is Miss Bates and she is wonderful in the role. Guy Henry is John Knightly and acts like Mark Strong’s sibling (they even seemed to have similar mannerisms). The casting really was superb in this version.

Now, things that I don’t like is it feels too short at times. The run time is 107 minutes, so sometimes it seems they tried to hard to fit so much in, they left things out. Compared to the film version, which is 120 minutes. Basically, I wish it was closer to the film in terms of length just so we could get a little more of the novel in to this version. Like the previous two versions, Mrs. Weston is not shown as being pregnant, even though in the book she gets pregnant and has a child. Overall, it’s a good version and I enjoyed it so much when it first came out, I purchased it. Watching it, you cannot tell it has a third of the budget of the film version, because it’s so rich and the outside shots are lovely.