This book was published in 2014 and I had not heard of it until I wanted to find a good copy of Austen’s Letters to re-read, as I had read them some time ago and knew they had been revised. Le Faye revised the Letters (which I will read and review), but I stumbled across this other book at my local library just a few days ago and finished it today. Now, I did post a review on Goodreads (I am listed under my name or as austenlied), but wanted to go further than that platform will allow.

First, I have to admit while I have spent over twenty years researching the late Georgian and Regency period, I have not spent much time on the agricultural aspect. It’s not an easy subject to research and without access to libraries in the UK, it would be extremely hard for me to do at the present time (they have wonderful collections scattered across the UK of old agricultural articles and magazines, plus museums which we do not have here in the US). While I have read the biography done by Jane Austen’s nephew, he did leave out a lot of her formative years, focusing instead on her relationship with her family, which is perfectly natural as this was his Aunt. So I was surprised to find out that Jane’s father, Rev. Austen, had rented a farm near his rectory and read agricultural journals and newsletters of the day. Such insight is important because Austen does reference these journals in more than one novel (Emma is the prime example being Robert Martin is said to have read journals). She even points out that one year, which was not a good year for farming, he only profited a measly 300 pounds. Considering he paid for men to work the field, and a manager to oversee the day to day running of it, that’s a fairly decent profit margin considering Jane leaves 500 pounds a year to Mrs. Dashwood and her 3 girls to live upon.

Except for 8 years of her life, Jane lived a majority of her life in Hampshire.

Secondly, what makes this book essential for anyone wanting to know more about how Jane Austen lived is the author’s ability to weave in parts of the novels and how they related to certain practices. Such as crop rotation, poultry, even the use of horses and carts (which poor Mary Crawford never understood). Mrs. Austen raised poultry and had cows for dairy, but then so did most wives living in the country. This did not mean Jane Austen grew up in poverty or they lacked money. It only shows how the daily life for Austen depended on farming and why she chose to set four of her novels primarily in the country (Persuasion and Northanger Abbey spend considerable amount of time in Bath; Mansfield Park does venture to Portsmouth, but Fanny Price doesn’t stay there for long). Of course, the author points out that the Stevenson rectory also had fruit trees, such as apples, Walnut trees, bushes which grew gooseberries, possibly other fruits like strawberries and how everyone relied on foraging as well.

Jane Austen (portrait based on the one done by her sister, Cassandra) and a drawing of the rectory of Stevenson.

Le Faye also mentions the import fact that Jane Austen grew up in an era of war. She was born in 1775, just a year before the American Revolution. Lived through the French Revolution and the War of 1812, plus skirmishes associated with the times. She had three siblings in the military (2 in the Royal Navy, 1 in the Oxford Militia) and lived at a time when the government was recommending crops such as potatoes be planted and harvested because it was cheap and filling. Her brother Edward, adopted by their cousins the Knights, allowed them to live at Chawton rent free as he owned the house. Everyone also thinks of Mr. Darcy as being exceptionally wealthy with 10,000 pounds a year, but Austen’s brother (who owned 3 properties but 2 inns along busy coaching roads), earned 6,000 pounds from one property alone per year. He, no doubt, wold be wealthier than Darcy. Considering how wealthy he was, and how poor Jane lived after her father died, I do find myself getting upset at her brother. This book really highlights how wealthy he was compared to the rest of the family, and he did so little for those who needed help. Godmersham Park, one of 3 properties owned by Edward Austen-Knight.

Regardless of how I feel about Edward Austen-Knight, we do tend to associate Jane with Bath, even though she spent so little time there. The author helps int out that whiel Austen enjoyed Bath for a short stay, living there permanently was a strain. Jane did travel to places like Lyme Regis, Portsmouth, and other seaside places, but it is noteworthy that while living in Bath, she never wrote. Jane may have edited existing works, but Bath seemed to hamper her creativity. Once she moved to Chawton, however, she wrote Emma, Persuasion, and was working on a new novel before she died at age 41.

The Jane Austen House Museum is the Chawton House, where she spent the last years of her life. What’s missing is the poultry, bushes of berries, and an abundance of flowers.

This is a book that I do feel is an essential tool in understanding Jane Austen better. Knowing more about her life in the country, being exposed to agricultural journals, helps me appreciate the times she did work that into her novels. Because that was true to her life and true to the lives of many people who read these books when they first came out. She truly wrote about what she knew and she understood the ways of people who live in the country far better than those that lived in places such as London. Perhaps this is what makes her a timeless author, the ability to connect with the pastoral. For even if you’ve never had a garden, many have seen gardens, experienced them from other family members, or even appreciated the wide open space afforded to us by a park. Austen enjoyed the simple, familiar landscape of her world because it was comforting during a time of upheaval. Familiar and probably second nature to her growing up. 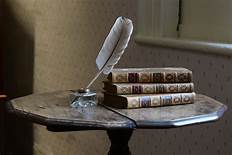 The table at which all her novels were written.