Forgive me for being so silent these past two weeks. My beloved cat, Jack, has terminal cancer and I’ve been at home processing this while trying to give him the best care possible in these last weeks he has left. He currently is doing well, is not in any major pain, and enjoyed cuddling with me these past two weeks while I continued my foray in the realm of Austen adaptations. 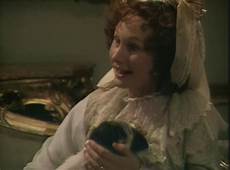 Angela Pleasance as Lady Bertram and Snuff as Pug

Today I wish to write about the 1983 BBC Mansfield Park adaptation. Mansfield Park was published in 1814, still in Jane Austen’s lifetime (a second printing was done in 1818 after her death, but no one gave any reviews of the novel until 1821). Oddly enough, John Plumtree, once time suitor to Jane Austen’s niece Fanny Knight, enjoyed this particular novel and approved of the way the clergy were portrayed in it. It’s true, in most of Austen’s works, she tends to ridicule the clergy for being overly pompous or vain, no doubt having come across such specimens in her own lifetime (or having heard about such men from her father). In Edmund Bertram, we get a man of the cloth who is sympathetic, kind, and one we do believe is suited for this profession (Mr. Tilney from Northanger Abbey is another, but since that novel was published after the author’s death, no doubt Mr. Plumtree would also have approved of it). This is one historical fact we must keep in mind when reading the works of Jane Austen or any writer pre-20th Century-men did go into the Church not as a calling per se, but as a viable profession. That’s not to say all men didn’t feel some pull towards the Church, but this was a time when it was seen as a career choice, not a spiritual calling (this is not Evangelicalism, you understand).

This adaptation was done by Kenneth Taylor for the BBC and stars some actors which may be all ready familair since these names have appeared in other Austen adaptations. Sylvestra Le Touzel is Fanny Price and should be familiar to anyone who’s watched the ITV 2007 adaptation of Northanger Abbey as she portrayed Mrs. Allen. As Fanny Price, she absolute perfection. She perfectly captures the unique quality of Fanny being the thin line of always having to obey the wishes of her family (The Bertrams) while trying to stay true to herself. The character is not an easy one to understand to most modern audiences. But one that I do understand and sympathize with a great deal. Fanny Price is neither a member of the family nor is she a servant, so she lives in a sort of purgatory realm. How she behaves and how she is treated by others is clearly a reflection of this. Fanny is often put upon to run errands for Mrs. Norris in all kinds of unsuitable weather because if she doesn’t, she is then told of how ungrateful she is behaving. Fanny’s life is never her own and she lives to be obliging to others because that is all she knows. I have often thought if that’s how Austen herself saw herself when she visited rich relations, a sort of obliging relative who must always agree with the host no matter what because of the lack of funds. But I have digressed too far off topic. 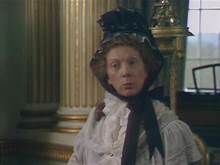 Unlike the earlier versions of other adaptations, this one appears to have been filmed inside an actual house for some scenes (if not all), which does give an air of authenticity to everything. If some of it was a set, it was extremely well done and I couldn’t find fault with it. The beginning is a bit unusual as it starts with a discussion of what to do with Fanny Price as she has been sent for. It’s taken directly from the novel and it’s interesting to see the conversation played out. Mrs. Norris (portrayed by the incredibly talented Anna Massey) convinced Sir Thomas and her sister, Lady Bertram to send for Fanny Price, but then seems to delight in telling them she cannot have the child live with her because it would upset her husband, the Vicar, too much. Important to note that they do actually show Mr. Norris on two occassions-once in the church and at his funeral. I don’t believe any other adaptation has ever shown Mr. Norris before, so I did like it. Some reviews get confused by the costumes and I do believe it’s because they think an adaptation should only exist in one short period of time, when this version starts off with the arrival of Fanny as a child, then progresses to her as a young woman shortly afterwards. To end the confusion, I believe the fashions of the late 1790s is what we first see on screen, which would make sense. It could even be early 1800s (the dresses pf the late 1790s could be worn in the early 1800s, so that would no be an issue). Then we clearly are 10 years later, so fashions would be around 1810-1815. I cannot give an exact date, but I am fairly certain that a general span of five years if pretty good. Now, this is important to show the passage of time because fashions would have changed in ten years, but to see Mrs. Norris sometimes wearing older gowns not only speaks of her thrifty ways, but how she is not one of those who is up to date on her fashions. Lady Bertram, on the other hand, is usually dressed in the same vein as her daughters, which would be expected for a wealthy lady at that time (though she spends most of her day longing about, she is wearing more fashionable attire). 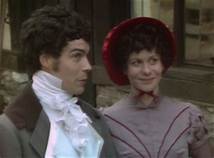 While I do like the costumes, I do have issue with hair-particularly the long hair on both Tom and Edmund Bertram. While men did have long hair in the Georgian Era, by the time of the French Revolution, young men tended to cut their locks in order to reject the style of their fathers and grandfathers. So, having the young Bertrams with long hair is just weird if it is 1810 at the earliest as it would have been very unfashionable for men. Now, they seem to rectify this by having Tom reappear after his return from London with shorter hair, which I whole heartedly approve of as it shows he’s much more aware of fashion than his family who are living in the country. Yet Edmund never cuts his and it is a problem. They are either trying to show Edmund is as conservative or aligning him with his father, or showing he is very old fashioned, which is an unusual choice. then, they also show William, Fanny’s brother with long hair and it just doesn’t seem right. He’s in the Royal Navy and while I am sure there were men with long hair, it would seem odd that someone in the officer arena would be that out of touch with Fashion. 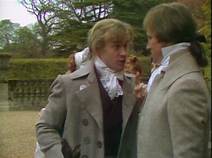 Christopher Villiers as Tom Bertram & Nicholas Farrell as Edmund Bertram; both have long hair, which is very out of place for men at this point in time.

Contrast their long locks with the Crawfords, who are sporting almost identical short, curly hair. Women did have short hair at this time. And it’s rare to see it being shown in any adaptation, so I do like it. I don’t mind both of the Crawfords have similar curly hair as it shows that they are related and like to be very fashion forward. Even their half sister, Mrs. Grant, is shown with similar dark hair which is seen to be wavy, if not a little curly. Clearly, this is a trait in order to visually inform us that they are related. Other than that, I like seeing Sir Bertram and Mr. Price in wigs. Older men wore wigs (not all older men, but some), so it’s a nice contrast between the two fathers. Fanny’s hair improves once her uncle returns and the wedding takes place (which I did like as it showed some attention was finally being paid to her).

There are some really nice costume details that if you aren’t aware of them, you will not notice them. Fanny wears a lavender gown with a drop front bodice. it’s a nice detail for two reasons; the first being you don’t often see a drop front bodice used in adaptations and the second being since Fanny would be dressing herself, a dress that closed in the front would be logical. It shows that research was done and an understanding of how a woman, without any servants to help, would dress at this time in history. It’s also why I like how simple Fanny’s hairstyles are, compared to Maria’s or Julia’s. They have maids to assist them in getting ready (in fact, they show Mrs. Norris and Fanny helping them decide on accessories for a ball). Fanny has no help and must do the best with her abilities. 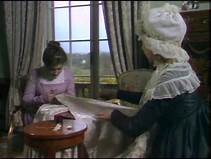 Overall, this is a very good, very faithful adaptation to the novel. Fanny goes to Plymouth and you see her family. There is a coarseness in how they behave and dress. Fanny is close to William, and they write each other a lot. Mrs. Norris is annoying, but you expect her to be so. Lady Bertram is expert at languishing anywhere, anytime, which is how she is in the novel. Pug was given the gender of being strictly female in this version (in the novel, Pug is a male dog, then a female dog later one, making one think that when one “Pug” dies, another takes its place and name). There is dancing, music, fun, and enjoyment. It is a long adaptation, I will not lie. But if you want a version that is true to the novel and is superbly acted, then you must see this one.