The 1999 film adaptation of Mansfield park is extremely unusual as it’s not just based on the novel. The writer of the screenplay, Patricia Rozema, also blended the letters and juvenila of Jane Austen into the script in order to give Fanny Price a pseduo-Jane Austen persona. While it’s an intriguing take on the novel, it’s also inherently wrong to blend the author’s life with that of her character. 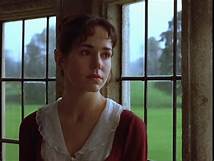 Now, they start off with an inaccuracy by having the mother, Mrs. Price, send Fanny away to Mansfield as if it were her choice. In the novel, it’s clearly stated that Fanny’s presence is requested by Mrs. Price’s sisters, Mrs. Norris and Lady Bertram, and with so many mouths to feed at home, Mrs. Price is more than happy to send her oldest daughter off to her aunts to be feed and clothed. It’s as if the screen writer wanted to place the burden of the decision on the mother. They screen writer also did away with the older brother, William, who is usually an important figure in the novel. He purchases the amber cross to Fanny and is her most regular corespondent. The relationship between William and Fanny contrasts exceptionally well with the sibling relationship of the Bertrams and Crawfords. That fact it was removed is sad. It was replaced with Fanny writing to her younger sister, Susan, in an attempt to make her more like Jane Austen and the author’s correspondence with her elder sister, Cassandra. I don’t mind the slight change in correspondent, but feel that they could have had Fanny write to both William and Susan. Why not show Fanny is close to both siblings instead of choosing one? 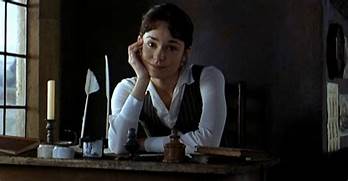 Another glaring inaccuracy is young Fanny seeing a slave ship and hearing the cries of the salves as they are either being tortured, raped, or killed. She is told by the driver that the ship is bringing it’s human cargo to Portsmouth. However, the slave trade (that is, bringing slaves to England) was banned by this time. They would trade slaves for sugar and tobacco in places like the West Indies and Antigua, then bring those items back to places like Portsmouth. For more information, I suggest looking up the history of the  Triangular Trade. While I can see that the filmmakers wanted to bring up the issue of slavery to the film, they could have done it another way. Such as having a young Fanny learn about Antigua or the West Indies and writing a letter to her sister about what she has learned for far. It would have brought the issue up in the film without making such a huge historical faux pas. 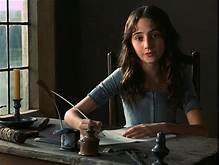 Now, there are some really good points in this film that I must point out. O’Connor is delightful as Fanny Price. Like the 1983 version, she is charming in the role and makes it her own. She is more playful and less serious at times, but it works for this adaptation. James Purefoy is hilarious as Tom Bertram (they even reference him going through an “artistic phase” and his “modern” painting, which I did love). Johny Lee Miller (yes, he’s back!) portrays Edmund Bertram. His second time in an adaptation of Mansfield park (having portrayed Charlie Price in the 1983 version) then, of course, he went on to portray Mr. knightly in 2007. I have a suspicions he may try to be in an adaptation of all of Austen’s works at some point in his life. 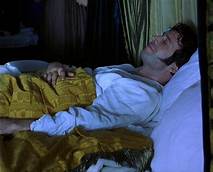 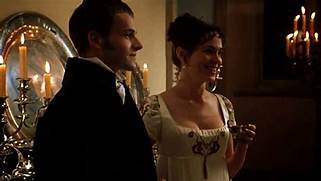 An interesting point by introducing Tom Bertram as being artistic is then they can use that “skill” to show the ugliness of slavery (which was still rampant in the West Indies and Antigua) in Tom’s sketches that Fanny accidentally comes across. The images you see on screen are not pretty. They are violent, graphic, and depict acts of murder and rape. But they are images being used to explain why Tom then comes home and goes on a death wish to try and kill himself by drinking and partying to an excess. It’s a behavior that’s never explained in the novel, other than he’s just one of those frivolous types, so I do like having a more solid reasoning behind the compulsion. It also explains some of Sir Thomas’ attitudes and actions. It’s a nice touch of historical research that was added to clarify what a property in Antigua would involve for those of us that would have no idea. It’s knowledge that would have been known to contemporary audiences at the time of the original publication that is no longer common knowledge. 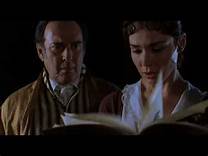 Harold Pinter as Sir Thomas Bertram & Fanny as she looks through Tom’s sketchbook from Antigua.

Because so much of the novel had to be condensed and left out for the film, the Grants are mentioned once and I suppose we are to presume that the Crawfords are just renting the Parsonage for the season (they are also said to be returning to the neighborhood, which is, I suppose, a way of trying to connect them to Mansfield without the Grants). It is unclear if the Grants are living in the Parsonage or not. It’s a very vague sort of area that is never fully explained. Also, considering Mrs. Norris’ husband was the prior Reverend and Edmund is not ordained, it leaves the question as to whom is the spiritual leader of the parish if no one has been selected? It’s a major plot  hole that is glaringly obvious. Especially when Maria gets married. Unless we are to presume the priest performing the ceremony is Mr. Grant (not listed as such in the credit, however). The Crawfords, though, are pure sex (as I believe they are meant to be. They are flirtatious, sensual, handsome, and worldly. they are everything that the Bertrams are not and are lacking. They are refinement on a scale that was not seen before, which is in line with the novel.

Now, we come to an interesting part, which is the costumes. While the novel was not published until 1814, in the film, Mary Crawford declares that the year is 1806, making the film set prior to the Napoleonic Wars, but after the American Revolution. The costumes do not reflect this at all. I would guess that the dresses are definitely after 1810 in fashion. And of course, there is a sensual scene with Fanny being undressed by Mary after getting soaked in the rain. It seems every Austen adaptation must include some kind of corset of nightwear scene for audience titillation. Quite frankly, it bores me. But the reason why the dresses in particular are not from 1806 is that they are too straight, too linear. Dresses from 1806 were still quite full in appearance. The slim lines we associate with the regency silhouette started to appear around 1808-1810. 1806 was still a softer, more gathered type of gown.

April 1806; notice the soft gathers under the bust. 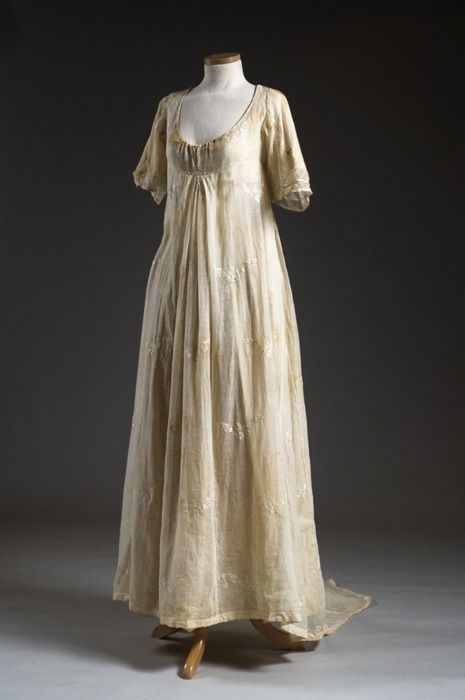 While lovely, Fanny’s ball gown is straight in the front. 1810s Embroidered Cotton (Charleston Museum); this looks more like the Ball Gown Fanny is wearing in terms of silhouette. 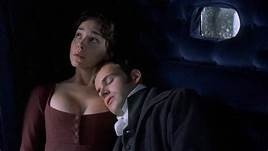 Also this gown, which is worn again and is particularly too tight and fitted for this time period. 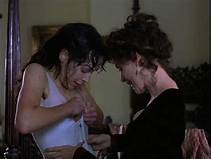 Also, this is a modern corset. With modern steel fastenings.

Things I am perplexed about in this adaptation are why have Fanny accept Henry Crawford’s proposal only to go back on her word the next day? That is out of character for Fanny. Unless it is meant to be a parallel with Jane Austen, who accepted a man, only to inform him the next day that they would not suit each other. It’s just odd. But then, I’ve always found it odd that Austen has Henry go down this road to redemption, only to screw up up and never fully be redeemed. Sort of like he’s a half-finished character or tale she never quite got right. I didn’t like seeing Henry and Maria having sex under Sir Bertram’s roof. I am aware that when they leave together in London, it is implied in the novel that they are having an affair. We do not need to see it. the fact that Maria leaves her husband is bad enough. Edmund seems to have issues with his manstick at times (his lip color seems too dark once in a while, that is definitely a makeup department issue). Another weird issue is in the novel, when Maria leaves with Crawford, Julia elopes with Mr. Yates. Instead, they end the film with Julia receiving mail from Mr. Yates. It’s a weird deviation from the novel that I don’t quite like because it seems awkward. Well, to be honest, the whole pantomime ending is a bit weird and awkward. I don’t mind it, but I don’t like it. There was also a conscious attempt at implying Mary Crawford was bisexual and sexually interested in Fanny Price. Now, the screen writer and director state that it’s directly implicated in the novel. I’ve read the novel several times and find no instances of Mary making any sexual advances towards Fanny. She expressed interest in Tom Bertram because he’s the heir, but falls for Edmund, despite the fact he’s to be a clergyman and she doesn’t like clergymen. 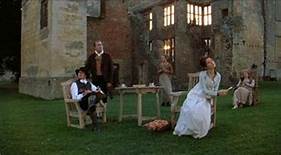 One of the weird staged endings.

There’s also the question as to the inappropriateness of Fanny being seen in her nightgown by her Uncle (when Henry Crawford wishes to propose the first time) and also when he follows her to Plymouth and proposes the second time (using fireworks and doves). I know it’s done to convey awkwardness and other factors, but ladies back then would not have appeared so in front of men. Especially in front of their uncles and prospective husbands! they had these things called dressing gowns that could have been quickly donned before being seen. Why no adaptation wishes to utilize them I have no idea. They should because it’s accurate and it’s also a nice piece of costuming to add. Not to mention they can wear it when getting hair done, or when getting dressed, etc. It was a very useful garment.

So, do I recommend this film? It is enjoyable and a really short film to watch at only 112 minutes. It’s not as accurate as the 1983 BBC version, but it’s the only major studio adaptation we have. As far as I can tell, there is no current plans to do another one anytime soon. As far as the novel, it is one of my favorites and I do recommend people read the novel first before watching any adaptation. Fanny Price has many nuances that no adaptation can every fully capture.