Finally I have come to the (perhaps) most well-known of Austen’s novels, Pride and Prejudice. Published in 1813, it has remained one of Austen’s best known and most favorite novels. This brings us to the 1940 film adaptation. The screenplay was written by Aldous Huxley and Jane Murfin based on a stage adaptation by Helen Jerome (produced in 1936), with some scenes adapted from the novel as they were not in the stage version. Now, this production is very interesting from a historical standpoint. Many people on-line complain that they believe the costumes were leftovers from Gone with the Wind (which came out in 1939). This is wholly inaccurate. This film was set to begin filming in 1936 (two years prior to Gone with the Wind) with Norma Shearer and Clark Gable in the lead roles of Elizabeth Bennet and Mr. Darcy under the direction of Irving Thalberg. Thalberg died unexpectedly in September of 1936, so the film was shelved until a new director could be found. Then in August 1939, MGM tapped George Cukor to direct with Robert Donat replacing Clark Gable and to film in Europe. Because of WWII, the MGM studios in England had to be shut down in September 1939, so filming then moved to the US. Cukor was replaced by Robert Z. Leonard due to scheduling issues. Leonard decided upon Greer Garson & Laurence Oliver to star (and for that, we are ever so thankful). Like Gone with the Wind, this had a tremendous budget of $1.4 Million. So, now  you know the history of all the issues of getting this film made, let’s now focus on the film.

This is the very first film version of Austen’s novel and it is a black & white film, There are colorized version out there, but I would highly recommend one stick to the original format, which is black & white.  Out of all the versions I have watched, it has one of the most interesting, and dare I say, dynamic beginning to the story. There is the usual little scenes introducing us to the various characters, but the most dynamic scene is the carriage race between Mrs. Bennet and Lady Lucas as to see who can reach their husband first in order to share the news of Netherfield being finally let. It’s completley different and due to technology at the time, you can tell it was shot in front of a screen. However, it really tells the audience Mrs. Bennet is focused on getting her girls married and will go to hilarious lengths (such as racing her carriage) to try and get an introduction to available men. It’s fun, silly, and informs you that the pacing of this film is going to be faster than the typical historical drama. I believe this to work in it’s favor. 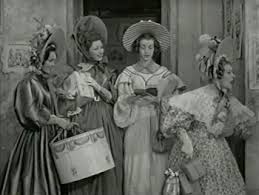 Now, the costumes (I feel it is important to discuss it first because I am sure many of you are wondering how I feel about it). I actually don’t mind the costumes. The film moves the general setting of 1812-1813 to around 1829-1835 (I feel it’s closer to the early 1830s). Sometimes I do feel the crinoline cage being used may be too “modern” because it was more used after the 1840s, and perhaps they should have stuck to using many petticoats to achieve fullness. Yet I do have to keep in mind that this is Hollywood in the 1930s and 1940s and historical accuracy isn’t a high priority at this time. The overall silhouette is fairly consistent with the 1830s. The hats are not, but I believe they were designed that way for the lighting (which was not as advanced as it is now). The dresses come across as luscious, romantic, and elegant. We must keep in mind that in the 1830s, many of the issues in Jane Austen’s novels were still relevant and contemporary. Moving the costumes and setting twenty years forward doesn’t really change the plot of the novel. Now, some people think the costumes were from Gone with the Wind (I’ve read many blog articles of people who believe that) or are from fairly close to the Civil War, but the silhouette is all wrong. 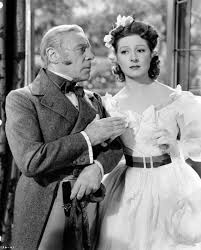 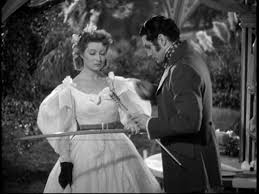 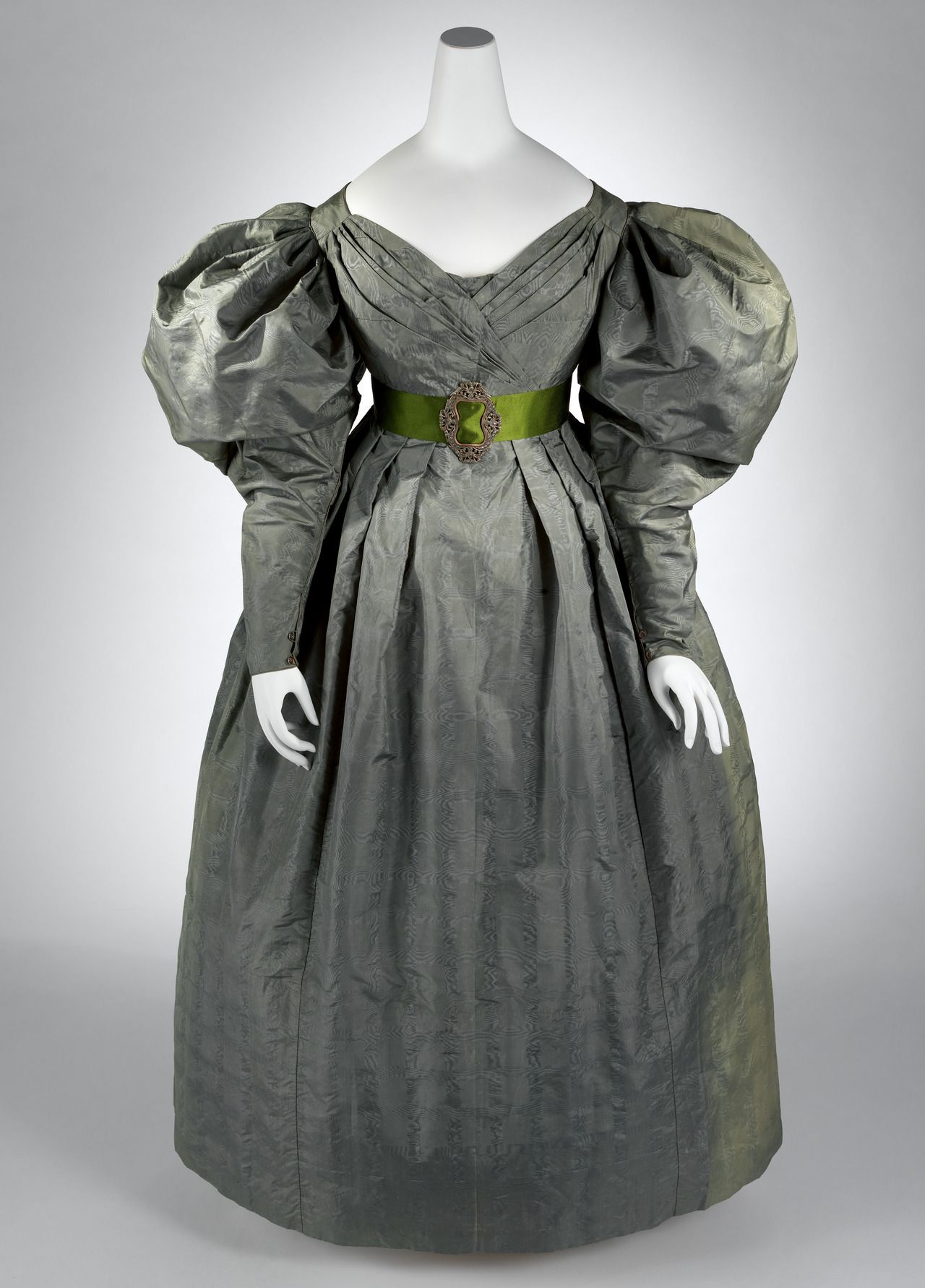 Dress from the 1830s (courtesy of the Met; notice the similarities in silhouette, the puffed sleeves and even the belt on this dress with the outfit worn by Garson for her archery scene. 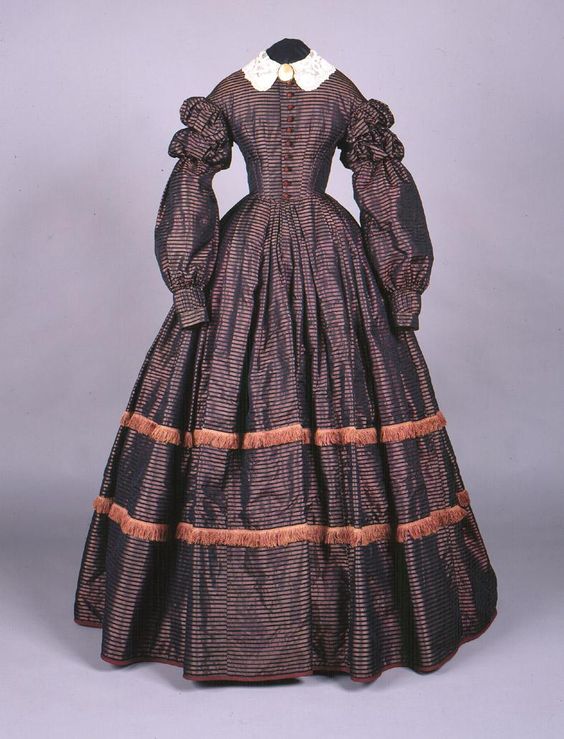 1860s Day dress (courtesy of the Connecticut Historical Society); I deliberately looked for a day dress with puffed sleeves to make the contrast easier. First, notice the sleeves are dropped and aren’t at the shoulder line. It’s not as puffy and the bodice has no pleating (it’s basically streamlined). The skirt is still full, but it looks like this has more fabric around the waist than the Moscow dress, which would be sensible since a crinoline cage would be worn under this while the Moscow dress would rely on quilted petticoats. 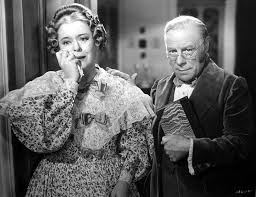 Mrs. Bennet (Mary Boland) and Mr. Bennet; again, notice the puffy sleeves. This looks more like the Moscow dress with the lace collar.

I know that was quite a lot of information, but hopefully just by looking at the stills from this film and comparing the costumes to what existing Museums, one can easily tell that the costumes are from the 1830s and not from the 1860s. Because it was set in the 1830s, the men are still in similar jackets from the late Georgian/Regency era, but instead of wearing knee breeches, men are wearing pantaloons now (Beau Brummel’s influence from evening wear has become standard men’s attire at this point). A nice period embellishment is velvet on the upper part of the collars for Darcy. That was a trend that started about the late 1820s and continued for most of the 19th Century (off and on really). 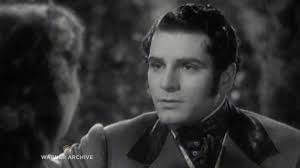 Changes from the novel that you will notice (if you’ve ever read it) is there are no Hursts, no Gardiners, no Aunt in town and no Georgiana (she’s mentioned but I believe is never seen). Collins was changed from being a clergyman to a librarian because this was the time of the Hayes code and it was against the Code to make fun of members of clergy (the code was abandoned by the mid 1950s and yes, it was Catholic in origin). Lady Catherine confronts Elizabeth in order to “test” her worthiness for her nephew (and I think the cousin Anne is missing as well because I cannot recall if she’s even in the film!). The film is just over two hours and a lot was cut. Some scenes like the carriage race and the archery were added because I believe they were trying to appeal to the same audiences who loved Gone with the Wind and films like Captain Blood. One has to keep in mind that Pride & Prejudice, as a novel, has very little action in it. Audiences still love seeing action (I myself love the film Hot Fuzz and Thor: Ragnorak), and the writers were trying to find a way of implementing some action, some external conflicts to make it more palatable to audiences of that time period. What I do find funny is the archery scene clearly influenced the same scene in 1995’s Emma (with almost some of the same witty dialogue). 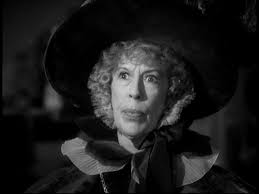 Things that are from the novel is the witty banter. Yes, some of the dialogue was changed and some was added (possibly due to the Hayes code or from the stage version). The conflict between Darcy, Wickham, and Lizzie remains. Jane still gets sick on her way to keep Caroline Bingley company. Charlotte still marries Mr. Collins. Wickham still elopes with Lydia. Kitty and Lydia are still extremely silly. Netherfield Ball still occurs and Lizzie still goes to visit Charlotte. The manners are still there, but it’s more of a comedy of manners than a strict novel to film version. But it works in it’s own way. You have Garson who is lovely as Elizabeth and Laurence is a charming, suave, and witty Darcy. Olivier oozes sexual charm and we could not have asked for a better version of Darcy. Yes, the actors are all older than the characters, but at this point in Hollywood, people were cast based on their talent first, age sometimes was not as much as an issue. 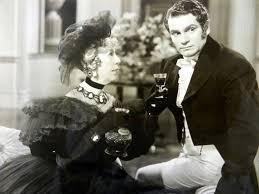 The cast is sometimes perfection and sometimes not. O’Sullivan is the first non-blonde Jane Bennet we have seen. She is sweetness and charm, which is how Jane should be. Mary and Mrs. Bennet are over the top in terms of being silly and ridiculous, which I don’t like. The actresses do a good job and play their part well, but the characters are written more for comedic relief than anything else (again, this was the trend at that time). Lady Catherine likewise is sometimes played for comedic purposes, but it sort of fits. Collins is always ridiculous, poor man. Bruce Lester as Mr. Bingley is quite forgettable. The whole relationship of Jane and Bingley take a back seat to Lizzie and Darcy. Karen Morely is a wonderful Charlotte Lucas. Morely is beautiful, wise, and sensible (I’ve always thought Charlotte should be pretty in some fashion). 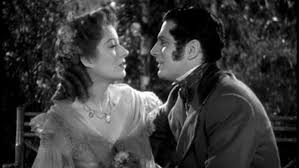 So, what do I think? I think it’s a fun, playful first attempt at a Jane Austen novel. It’s not perfect and gets quite a few things wrong, but you get caught up in the playful, witty dialogue of Lizzie & Darcy that you just forget. I don’t mind the moving of the novel to a different time period because it really changed nothing . All the society norms and expectations didn’t drastically change in 1830 from 1813 when it first was published. I’m fairly certain one could move the film even to the Edwardian Era without having to change much because roles of women (and the expectations of how we were to behave) remained fairly constant until after WWI. This film still has (currently) a 100% approval rating on Rotten Tomatoes, which says something about how fun of a film it is to have that high of a rating. To contrast, the 2005 Pride and Prejudice currently has an 86% approval rating. Sixty five years and the older film has the better score. 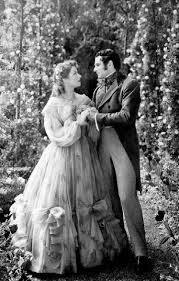 For a first attempt, I love it. Yes, it might not do for some people because it’s not in color. It’s not wholly accurate. It was set in a different period. But the charm, the vicarious quality of the main actors, is still there, still worth viewing. The bonus is it has a typical Hollywood ending in that Lydia and Mary have suitors, thus making Mrs. Bennet extremely happy. It’s well worth the viewing, if you’ve never seen it. And worth adding to your library, if you love Jane Austen or Classic Films.

Henry has done this ever since I got him
Dear Diary,
How is this comfortable?!
Peter Parker is feeling the love
When mom finally gets that right spot
Treated myself to a really glorious water vessel fit for any #lokivariant Courtesy of #longdogdecals