The 1981 BBC adaptation of Sense & Sensibility is the one which is included in the Jane Austen collection. After watching the 1971 version, on some level I had felt that I had seen it somewhere before, yet knew I had never watched the earliest version in my life. The reason for this being, oddly enough, is the 1981 adaptation was dramatized by Alexander Baron who used the 1971 outline by Denis Constanduros. So the 1981 version is an adaptation of an adaptation. In fact, many of the scenes are eerily familiar as are the characters that are used and the ones that are cut. Watching this gave me a sense of déjà vu. Rodney Bennett is the director (his name is familiar to me as he directed some Dr. Who episodes in the 1970s). 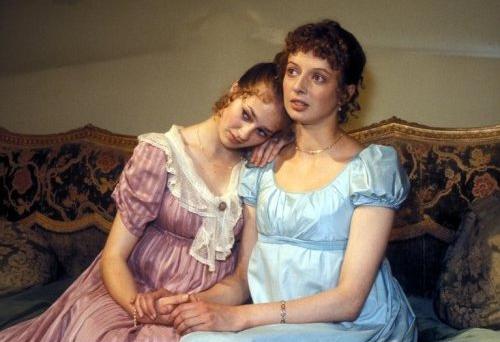 This adaptation starts out differently and at first, one thinks the Dashwoods are coming from the funeral of the late John Dashwood. They are all in mounring, in a carriage, and heading away from a location back towards Norland Park. You find out during their conversation that they have in fact been inspecting a house in the neighborhood that is far above their means, since they have only 500£ to live on a year. Like the 1971 version, Margaret doesn’t exist, which means that amount of funds seems a little more manageable between three ladies instead of four. The money, of course, leads to the great discussion brother John has with Fanny and the possibility of giving them money; knowing how little they have, 100£ more a year would really have benefited the Dashwoods and would not have inconvenienced John at all. Though we must recall Fanny is a skinflint as the son is not in existence in this version either.

Elinor shown drawing on very nice rustic benches. I do appreciate showing the drawing as it was something I could connect to Elinor over.

Like the 1971 version, Elinor is shown as someone who draws, which is straight from the novel. I did enjoy the way in which she was trying to educate Edward in trying to see things with an artistic eye, because it was sweet and showed how theire relationship could have started. Bosco Hogan is wonderful as Edward, has no stutter, but does have moments of hesitation in his actions which is appropriate for that character. Marianne is mentioned as not yet being 17 (though do recall she is 15 at the beginning of the novel), so this is an attempt to making her closer in age with her novel counterpart. Like the 1971 interpretation, Marianne is overly dramatic in the ways in which she says farewell to Norland Park, which is something she never does in the novel. Fanny is perfectly evil though. 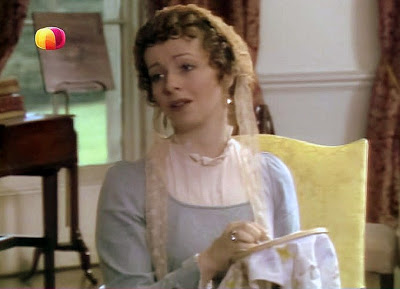 Elinor and Marianne in London

The hair in this version was pretty good. We don’t have that overly puffy look on the men and the women seem to have decent hairdos with curls and buns. Some variety is obtained with the use of mobcaps, braids, and occasionally bonnets when outdoors. Now, we do have mutton chops on the men, but they are not overly large and are more inline with what would be period appropriate (for the most part). There are, of course, portraits of men during this time period with massive mutton chops, which people have emailed me to point out my fallacy, Trust me and believe me when I state that I am well aware of these portraits. But these portraits are few and far in-between and the norm seems to be smaller to no mutton chops rather than the bushy examples that tend to be used. Having a few men here and there with the bigger versions would not bother me as a designer and as a historian. It bothers me when it’s practically all the men. 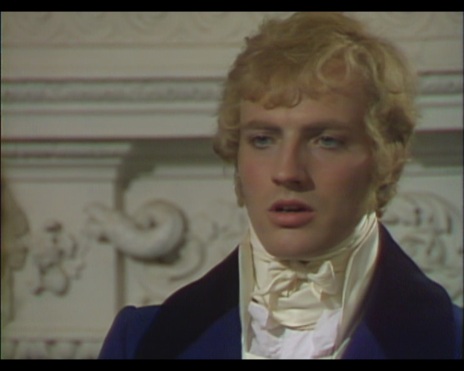 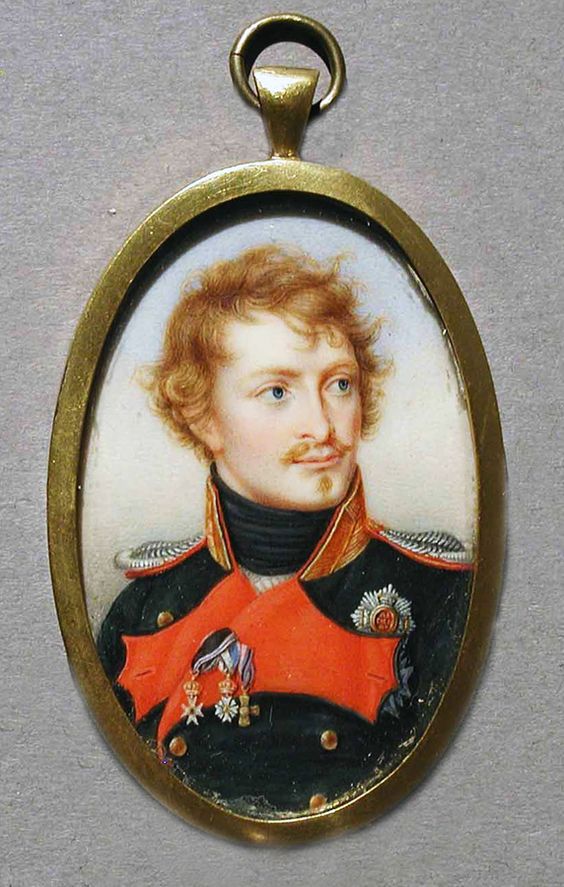 1815 Miniature of an Unknown Soldier (French I believe); no mutton chops but a really sweet Mustache & Soul Patch combo (courtesy of Carnegie Museum of Art) 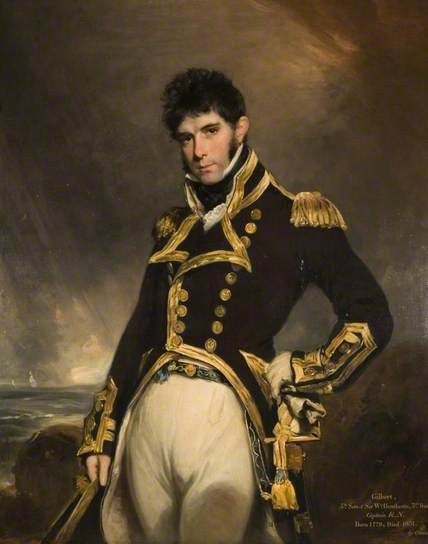 The costumes as well aren’t bad. There seems to be an attempt to use more cotton or cotton blend fabrics to get more of that airy, light feel we associate with the Regency dresses. They do seem to use silk (or at least something that resembles silk) for the most dressier gowns worn by Fanny or Mrs. Jennings at times. A few of the dresses used by the extras in the background looked familiar and were no doubt dresses from previous adaptations, so could be from the 1970s or be stock costumes from local theatrical agencies as well. The colors were sometimes a bit too pastel and while that isn’t historically accurate, at least the use of cotton instead of polyester is an improvement.

Elinor, Marianne with Mrs. Charlotte Palmer (Hetty Baynes); I believe Charlotte is meant to look pregnant, but it’s hard to tell. The dresses do look to be of cotton or cotton blends,just very pastel in coloration.

Lucy Steele (Julia Chambers) in a red Spencer and bonnet. The material looks velvet, but I believe to be more of a polyester blend. The red is also too dark; reds at this time were more bright like a poppy red.

I did like the use of jewelry, even if some of the necklaces looked to be too tight and short. Too often adaptations today shy away from the use of jewelry and makeup, thinking they weren’t used nor worn. They were very much in use at this time. 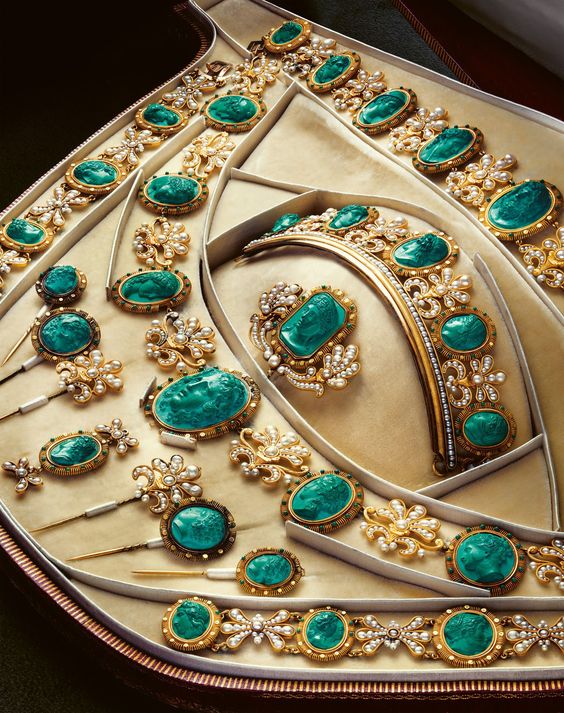 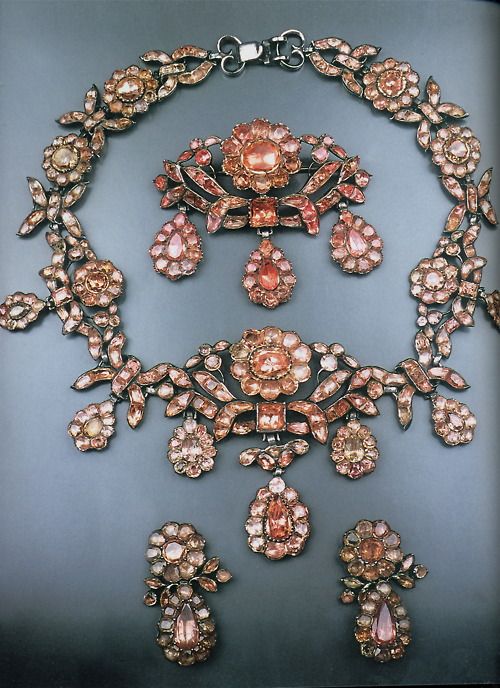 Pink Topaz dating from the Georgian Era (from the book Georgian Jewelry 1714-1830); one would fully expect a Regency lady to still wear something like this if it was an item passed down ion her family. This set is a pair of earrings, necklace and a brooch/pin.

Makeup set belonging to Queen Louise (1776-1810); courtesy of stadtmorgen.de (my German is rudimentary at best)

So yes, jewelry was worn, as was makeup which is something we have got to acknowledge and push for when it comes to adaptations of not only novels written during this time, but any films being set during these times as well. It’s ludicrous to presume that people stopped wearing jewelry and makeup during the American and French Revolution only to pick it up again during the reign of Queen Victoria. All I am saying is due better research costumers. I know you often have to also be in charge of makeup and hair, but expect better research from assistants. I may add I am always available to do this research for you and would gladly do it for money (I do have bills to pay as do so many of us, so might as well put such skills to good use!).

What makes this version different from the 1971 one is Edward does visit the Dashwood family at Barton Cottage after visiting Lucy at Plymouth nearby. It’s mentioned he visited Plymouth in the 1971 version but never stopped to see them, even though Plymouth is near Exeter. First, this does happen in the novel, so that’s nice and it’s good because it introduces Edward to the Middletons and Mrs. Jennings, which allows them to kid Elinor about him when they go to London in front of Lucy Steele, not knowing it’s Lucy Edward is engaged to. It helps create that little bit of chaos in the Edward-Elinor relationship that we all do enjoy, even though we find it heartbreaking. Lucy is shown to be very pretty, if not spiteful and cruel in her own way, while Ann (Nancy in the novel) is very coarse and spinsterish, which fits with how they act and how Austen seems to describe them. You also feel some pity for Lucy because she is faithful to Edward for so long and he is not the best correspondent. There are some weird choices in this version as there were in the previous one. Margaret is gone and doesn’t exist. John and Fanny have no child, and therefore no reason to not want to give any monetary assistance away. Nancy Steele’s name was changed to Ann, which I am puzzled over. Sir John and his wife only have one child, a son, and no other kids. Sir John also doesn’t have any dogs, but at least they show Willoughby out hunting with one (that bitch of a pointer flossy line which always makes me smile). They did include Robert Ferrars and his quest for the perfect toothpick case through is talking (which almost is always cut even though it’s really a funny little tidbit on his character). Charlotte Palmer used to have a really green bedroom in London. I’m not kidding (seriously, it’s GREEN). And as for the dresses, it’s really hard for me to tell if the back of them are buttoned, laced, or have zippers. I suspect that it’s a mixture of all three and depends on if they are a main character, secondary, or just background extras.

Elinor, Marianne, and Willoughby. At least this time, Marianne really does fall down a hill.

I did have to suppress a giggle when they show Marianne writing letters on thick parchment paper (and I mean thick paper). I suspect the paper was art paper meant for watercolour, perhaps charcoal or pen and ink because of the thickness and coarseness that I could surmise. I giggled because whenever they received a letter, it was on extremely thin onion skin type paper. Somehow, magically, thick coarse paper was used by everyone to write letters, but through th magic of the post-chaise, they all became smooth and delicate pieces of paper. There was also the obligatory nightgown with hair all free flowing and loose scene because of course there is. Considering women didn’t wash their hair every day, and probably more like once to twice a month if they qwere lucky, they kept that hair plaited (braided) and in caps when sleeping to keep it clean and free from things like fleas and lice. Free flowing and loose looks romantic and erotic on screen, but not very realistic. 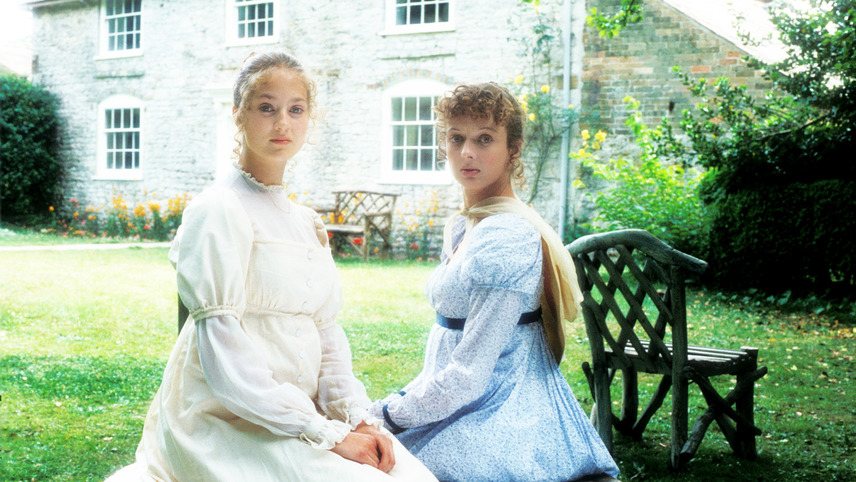 Marianne & Elinor in front of Barton Cottage. I do like the rustic benches.

So while this is very familiar to anyone who’s watched the 1971 version, it’s just slightly different, and updated enough in terms of costumes and hair to be worth watching. I found some of the scenes and lines to be almost exactly like the 1971 version that I was hard pressed to not roll my eyes. While this version is the one most people believe to be the first adaptation of Sense & Sensibility, it is the first one that was shown in the US and it’s probably why it was included int he Jane Austen collection over the 1971 version. So yes, do try and find it and watch it. It’s seven episodes, but each one is short and one can watch this in a day. You don’t have to, but you can.

This version has one of the best Fanny freak out scenes ever. 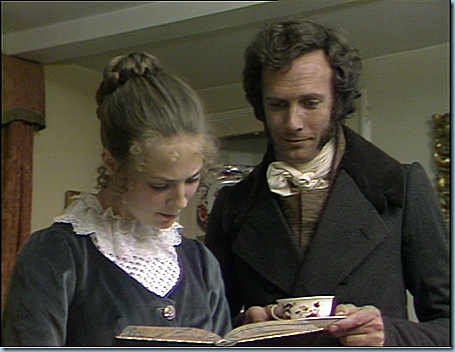 Marianne and Bradon bonding over books; he looks very Darcy-esque in this version.

Elinor and Mrs. Dashwood pouring out cordials. Not often this is shown as most show tea. 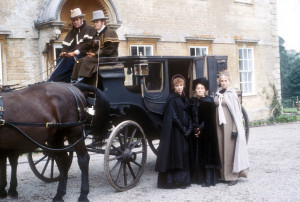