We now come to what most of us have probably all ready seen. The screenplay was adapted by Emma Thompson, who won an Oscar for it and the film was directed by Ang Lee (a golden globe winner at this time). Costumes were designed by Jenny Beaven and John Bright (they both designed the costumes for Room with a View in 1986 and won Oscars for their designs). So, this production had impressive talent behind the screen and in front of it.

So, unlike previous adaptations, it starts off with the father dying (Tom Wilkinson is a brief cameo) and extracting a promise from his son to look after his stepmother and his half-sisters. This is from the novel and is also spoken of but never seen. I actually like seeing it because it makes the nest scene, where John and Fanny are discussing it, all the more evil for not anting to abide by the promise he made to his dead father. It really highlights just how miserly the pair of them area as to deny helping his half sisters even though he promised his own father on the man’s deathbed. 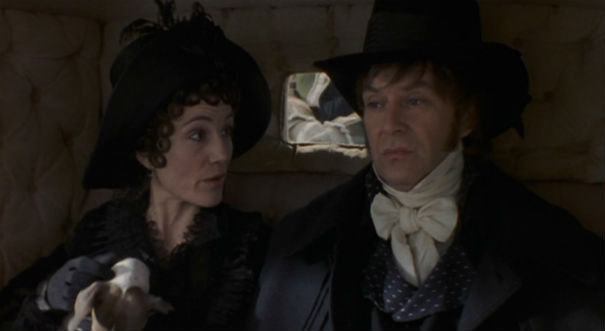 There is no mention of them having a son (it’s in the novel) and this isn’t the first adaptation to not have him present. I don’t think the son really adds to anything other than to give them a slight excuse for being so miserly (wanting to save the money of their son). Not having him just allows them to be seen as being greedy and for who they truly are. Though I do love the substitution of a lapdog for the son. It’s period correct that wealthy women had ornamental lap dogs and who’s to say that they don’t have a son, but he was sent away for schooling by this time? This is also the first adaptation to include Margaret, the youngest sister, which makes the meagerly 500£ for four people seem even more strained (as it should be).

Next to his role in All Creatures Great and Small, this has to be my favorite role for Robert Hardy (others will remember him as Cornelius Fudge from the Harry Potter films). He was also an expert on the Medieval Longbow and wrote two books on the subject. But in this role, he really sparkled as Sir John. He’s funny, charismatic, playful, and does everything he can to be of assistance to his cousins and neighbors. I actually don’t mind that he’s a widow as Lady Middleton really does play no significant part in the novel other than to be annoying. As for the Middleton children, I would assume that if there are any, they are being taken care of at a local farm (if they are too young which was customary) or are of an age that they are away at school. If not, then he probably has a cousin who will inherit. He seems to be happy nonetheless. Elizabeth Spriggs portrayal of Mrs. Jennings is as lighthearted and fun as Patrica Routledge’s version from 1971. She is also overly bubbly, vivacious, and has grand gestures and it works for her character. She is also sweet natured and kind, which does endear this character to you. 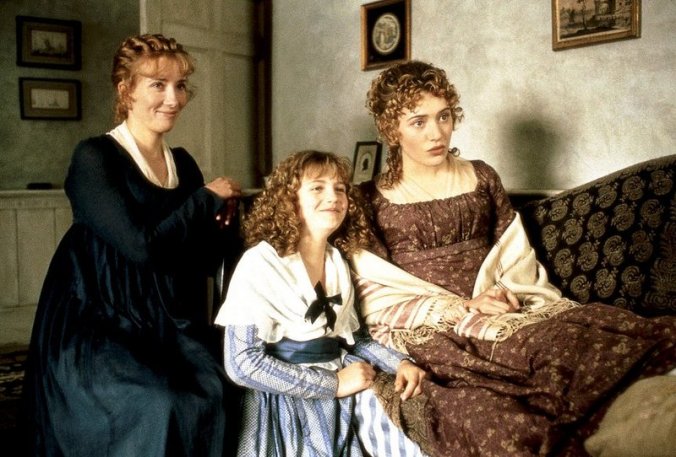 The hair in this film was extremely well researched and done very well. Now, if one is gong to have children with their hair down, this is how to do it properly. Girls who were not out could have their hair down, but it had to look neat and tidy as well. Once a girl has transitioned from the school room and was “out”, her hair was up. So, notice how Elinor and Marianne have hair that is up, but Margaret, being only 12 and still in the schoolroom, is allowed to have her hair down. Also let’s talk about how they all, at a glance, look like sisters. All have similar colored hair and texture. Margaret has the curliest, with Marianne with curls as well, Elinor, one presumes, has more wavy hair. Yet they all look like they are related. Plus the use of natural light in this film makes it stand out more than any other adaptation. One can truly see the colors and textures without a lot of influence of gels on top (gels being colored filters). Though some filters were probably used to soften the light, there was a push to try and use or mimic natural light for this film by the director. It gives it a freshness and clean look that was not seen before.

Willoughby’s hair is also very well done. The fading of the mutton chops highlights his cheekbones, which plays up his mouth. He is a rake, but is meant to be romantic at the same time. Very Lord Byron with his hair and the colors used on  him are very warm, very autumnal, which was a nice contrast with Edward, who was very cool (and so mimicked Elinor).

Brandon likewise had a nice fade and while his hair was longer, I think the intent was to show he was not as fashionable as Willoughby, so perhaps didn’t get his hair cut and styled as often, which is in line with the character. This is probably the first film most people know Alan Rickman from and fell in love with him. I liked him in Die Hard and didn’t like it when they killed his character off (also didn’t like it when he died in Robin Hood either-he made villains seem more charismatic). This version of Brandon is less like Darcy and more in like the character from the novel. He’s more in tune with his feelings, more soft spoken and more romantic. Less brooding too, which I appreciated. Brandon should be allowed to be his own person and not some kind of Darcy wannabe, which is what the previous versions have done.

Elinor and Edward Ferrars (High Grant); Norland is shown to have a working farm on it.

Now, some critics didn’t like that the scene where Elinor and Edward go riding was added as it’s not in the novel. I think it worked for the film because it shows these two spending time together away from the house. People did ride horses on their estates as a form of exercise. And it shows Norland to be a working estate with the sheep and cows in the background. All of these things are period correct. So they changed Elinor drawing to her riding a horse and I don’t mind. It’s a minor change and doesn’t affect the main story at all. Likewise, they cut the scene where the Dashwood sisters meet Mrs. Ferrars, which isn’t important to the plot, and they cut Nancy Steele as well. Again, not important to the plot as long as Lucy Steele is still there (which she is and somehow making her responsible for revealing her own secret is somehow much more poetic).

Marianne, Margaret, and Elinor; notice all three are wearing aprons.

I really cannot find fault at all with the costumes. A lot of detail went into them and a lot of research as well. I can tell that period undergarments were being worn based on the silhouettes. The attention to detail in having them all wearing aprons or smocks when when teaching Margaret as to protect their gown from ink is such a little, tiny historical accuracy that I wish more productions put in. Especially when you see all the correct period instruments like the pounce, and ink bottle is there.

There are some key scenes that were cut that some people do complain about, but I think given the restrictions of time, they were not so pivotal to the plot. One being Edward visiting them on his way back from Plymouth. Yes, it’s a nice scene in the novel and other adaptations have included it, but this is a film and if it comes down to Edward visiting the Dashwoods or the Dashwoods going to Cleveland Park, the latter is the more important scene. People also didn’t like that Willoughby didn’t come and visit Elinor to confess and, therefore, redeem himself. But, in a way, Brandon redeems Willoughby when he informs Elinor that he heard from Lady Allen that Willoughby’s intentions towards Marianne were honorable. So, while that scene was cut, the information that he did love Marianne, that he was going to marry her, is still related to Elinor so she can inform Marianne. And it’s done in a way that works and still fits the world of the novel. 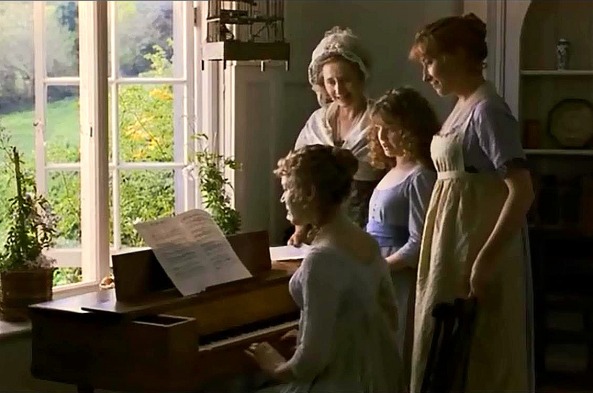 The Dashwoods around the Pianoforte

The only complaint I can make is the gift of the pianoforte by Colonel Brandon. In the novel, they all ready have one. Willoughby spends time at the Cottage signing and sharing music with Marianne over the instrument. This gifting of the piano actually comes more from Emma than Sense & Sensibility and in that case, such a gift was considered highly inappropriate by Jane Austen herself. However, I can see how the filmmakers wanted Brandon to make some kind of grand romantic gesture and decided that this would be his way of declaring his intentions to Marianne in a way that she would understand. That uniform is so beautiful it makes me want to cry! Oh, and her veil is attached to a bonnet.

So, I do recommend this film because it’s the only film adaptation we have. And I do mean ONLY. There are 3 loose adaptations (Material Girls, From Prada to Nada, Scents & Sensibility), but I am only concerned with actual adaptations, not so loose as to be practically unrecognizable, which these are. I’ve checked and there are no plans to do another film version anytime soon. It’s actually weird because it seems filmmakers tend to focus on Emma and Pride & Prejudice than any other novel. If you love Austen, then this should be in your collection. If you’ve never watched it, please go and rent it from your local library. It’s charming, beautiful, and such an amazing adaptation of the novel. Plus you get the infinite joy of seeing Hugh Laurie as Mr. Palmer (which makes me laugh every time).